“What is the cure?” That is the question my wife and I asked ourselves when the doctor told us our first child was born with a rare liver disease (Neonatal Hemochromatosis). “Your son is a very sick boy, and his only hope for survival is an immediate liver transplant. His liver has shut down, and is completely dysfunctional,” the doctor told us. Our son was ten days old, and they had just discovered what his problem was. Externally, our son Andrew’s entire body was swollen like a balloon. He required a ventilator to breathe. His cheeks were black and blue, and so swollen he could not even open his eyes. Internally, our son had an iron displacement disease of the liver that had caused liver failure and his major organs to be extremely enlarged. One nurse commented, “Drew’s heart, on x-ray, almost completely filled his chest cavity.” 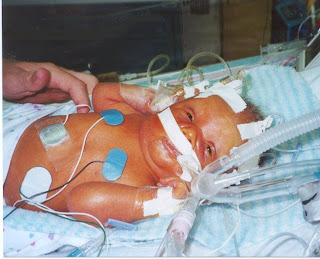 The next day, we were on our way to Atlanta. The doctor's hope was that our son might receive a transplant before it was too late. However, to our amazement, after a few days of testing the doctors informed us that our son was not eligible for a transplant. They reminded us that Drew had suffered from a week of bleeding lungs and grade-four bleeds of his brain. “I’m terribly sorry, Mr. and Mrs. Sinclair, but there is no way your son could survive an intense procedure like a transplant surgery. Such an attempt would, without a doubt, cause massive hemorrhaging throughout the rest of his body.” The doctors did give Drew a “cocktail” of drugs that had helped in a small percentage of infants in the past. However, the doctor said we would see improvement in just a few days if the drugs were going to work. After a week of absolutely no improvement, the doctors tactfully explained to us that our son would not likely live but a couple months.

My wife and I returned to our home in Chattanooga and continued to pray, as we had all along, that God would heal our son. Thousands of believers around the world joined us in prayer for a miracle of healing for “Baby Drew.” When we returned to Chattanooga’s NICU we told our new doctors that we were praying with countless others for a miracle of healing. The doctors assured us, “if Drew survives, it will be nothing short of a miracle.” To the amazement of many, Drew started getting better! I remember telling one doctor again how we were asking Almighty God for a miracle of healing. He answered, “Keep doing whatever you are doing. It must be working, because we are not doing anything for him that should be bringing about these kinds of positive results.”

In just a few days, Drew’s grade-four bleeds all but vanished. His swelling went down. His blood work stabilized. He started breathing without the aid of the ventilator, and he began opening his eyes and moving around just like any “normal” baby his age. Now, after the two-month period of time the doctors projected our son might live, he is home and doing perfectly fine! Praise the Lord!

The cure for our son’s disease was Jesus Christ! Dear friend, I have shared with you this true story of my son as an introduction to another true story. Several years ago I realized that not just Drew, but every single person born into this world is born with a lethal disease. This universal disease does not affect just the body, however. The disease I am speaking of will cause permanent punishment to your soul. The disease I am referring to is the pandemic disease of SIN. God said in His Word, the Bible, “For all have sinned and come short of the glory of God” (Romans 3:23). This statement means that, without exception, we are all infected with the hereditary disease of sin (Romans 5:12)! The worst part about sin is its prognosis. “For the wages of sin is death;” (Romans 6:23). Everyone who does not receive the cure must spend eternity separated from God in the place called hell. The Bible calls this separation “the second death” (Revelation 20:14 -15). These verses mean that every person born into this world carries an eternal death sentence. “And as it is appointed unto men once to die, but after this the judgment.” (Hebrews 9:27)

“What is the cure?” you may be asking yourself. JESUS CHRIST IS THE CURE! He said, “I am the way, the truth, and the life.” No other cure exists (Acts 4:12). You see, Jesus Christ loves us so much, He died on the cross for all the sins of mankind (Romans5:8). He has already created the cure and made salvation from sin’s penalty available to anyone willing to receive Him. Just like any cure, He must be taken and received into your life. Salvation is a free gift to everyone. However, not everyone will die and go to heaven, because not everyone has turned from his sins and received Jesus Christ as his Savior.

Have you ever received Christ’s free gift of salvation, or if you died today would you still have to pay your own eternal death penalty? I urge you to receive Christ right now. Romans 10:9-13 states, “That if thou shalt confess with thy mouth the Lord Jesus, and shalt believe in thine heart that God hath raised him from the dead, thou shalt be saved. For with the heart man believeth unto righteousness; and with the mouth confession is made unto salvation. For the scripture saith, Whosoever believeth on him shall not be ashamed. For there is no difference between the Jew or the Greek: for the same Lord over all is rich unto all that call upon him. For whosoever shall call upon the name of the Lord shall be saved.” Are you ready to receive the cure? Mark 1:15 says, Now is the time; “repent ye, and believe the Gospel.”

Call out to God right now, turn from your life of sin and believe on the Lord Jesus Christ for the forgiveness and freedom from your sin. If you have chosen Christ to be your Lord and Savior today, we would love to hear from you. Please e-mail us at: Cameroon4Christ@yahoo.com

All to the Glory of God,

Current Update on Drew’s Condition: Shortly after the tract you just read was printed for distribution (more than 100,000 have been printed), we noticed that Drew was having difficulty with the development of his eyesight. We took him to a few doctors and the end result was two eye surgeries. The necessity of these surgeries was an indirect result of his liver disease. Since the age of four months Drew has worn very thick glasses, but these glasses are the only permanent effect of the disease. He requires no medication for any reason today, and he never had a liver transplant or surgery! Today, Drew is a pretty normal kid. With the aid of his glasses, he has 20/40 vision in one eye and 20/100 vision in the other. He has learned to read. He runs and plays like most kids his age, and loves to play his Nintendo DS. He is normally very healthy. He can quote from memory about fifty verses from the Bible and all sixty-six books of the Bible in order. He is a good "big brother" to his sisters and his favorite cartoon characters are Buzz Lightyear and Spiderman. We have knowledge of more than ten people who have trusted Christ through "Drew’s tract." If you would like to donate to help with the next printing, you can mail a check to our home church, Calvary Ind. Baptist Church. The address is printed below. It costs about five cents to print each tract in full color on quality paper. 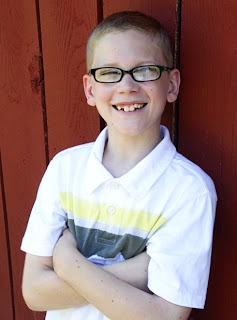